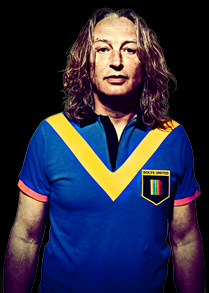 Me in a nutshell
I started composing advertising jingles and radio station jingles. Later on, I studied at the Dutch Film and Television Academy. Once I graduated, I directed corporate videos, TV films and shows. When internet started, I turned into online designer. From 2000 till 2007 I was creative director at FHV/BBDO – Atmosphere and Proximity, there I got into brand activation.

My best work so far
The best work has been for KPN. We won a Silver Lamp for our internet virals. Thanks to us, KPN was able to give customers structural and objective advice, which led to a very successful loyalty program.

I like this
I love those strangely intoxicating BBC mathematics courses, taught by a man with abundant facial hair who uses his hands to follow simple animations of geometrical figures, mumbling incomprehensible algebraic formulas in a hypnotic voice. A short spa vacation on your own couch! Startrek also works.